The Initial Pull for the Snatch and Clean 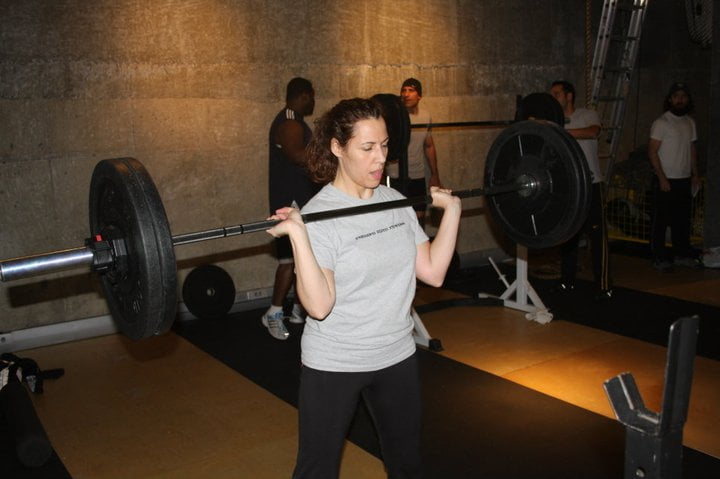 Just like we all tend to focus on the snatch and clean more than the jerk when it comes to technical discussions in weightlifting, we tend to focus more on the second and third pulls of the snatch and clean than the first because that seems to be where all the thrill and glory lie. But the first pull is not only critical for successful lifts, it has quite a few of its own technical nuances and plenty of opportunity for error that will influence the rest of the lift.

Let's just make sure we’re all on the same page with the terminology:

First Stage: The lift of the barbell from the floor to the point at which the second pull is initiated (ideally around mid-thigh).

Second Stage: The final upward extension of the body to accelerate and elevate the barbell with the legs and hips (from about mid-thigh to the full extended position). Note that some coaches and literature consider the transition (scoop/double knee bend) as its own phase between the first and second pulls; I include the transition in the second pull because it occurs directly as a result of the action of the second pull).

Third Stage: The active movement of the lifter under the barbell into the receiving position.

The purpose of the first pull is simple: to create the optimal position, balance, speed and timing for the lifter to perform effective second and third pulls. It produces the initial baseline of speed, but acceleration is not really the point; that is, while the bar accelerates a great deal (really just because it’s starting at 0), the true power will be imparted to the bar in the second pull (except with an error with lighter weights I’ll discuss below). Lifters can be successful with a very wide range of speeds in the first pull, which will be determined by the lifter’s proportions, relative leg and hip strength (which can be influenced to a degree by training), and intent (and the resulting effects this has on ability, e.g. if a lifter always intentionally pulls slowly in the first pull, eventually that’s the only way they’ll be able to do it).

Balance and position in the transition between the first and second pull are the most critical aspects. If these are incorrect, it’s typically too late to make any significant changes with anything beyond relatively light weights. For example, if a lifter begins the second pull with a significant forward imbalance, he or she will not be able to rebalance the system during the second pull unless the weight is light (more relative to bodyweight than to max).

...the first pull is not only critical for successful lifts, it has quite a few of its own technical nuances and plenty of opportunity for error that will influence the rest of the lift. - Laura Skellchock

The basic movement of the first pull brings the lifter from the starting position—weight balanced over the whole foot and shoulders directly above or very slightly in front of the bar—into the second pull position—weight balancedslightly more toward the heels, shoulders in front of the bar. The bar will move backward toward the body somewhat (how much depends on the height and proportions of the lifter and how that influences the starting position of the bar relative to the foot), and the shoulders will move forward over the bar as the hips move toward as the knees extend.

The optimal speed of the first pull is not a constant value, and will vary, both in absolute terms and relative to the second pull, among athletes based on a few factors such as proportions. Put as simply as possible, the bar should be moved no faster than what allows the lifter to create and maintain proper position and balance, and to apply maximal force in the second pull, and no slower than necessary to achieve these ends.

Following are the most common first pull errors. Of course, the starting point for correction of any of these is to ensure you or your lifter understand the previous—the purpose and basics of the movement.

Between the floor and the start of the first pull, the shoulders will move forward into a position in front of the bar. Often lifters and coaches mistakenly believe this movement is, or requires, a significant change of the back angle; that is, that the lifters hips must rise faster than the shoulders so that the trunk leans over more. The back angle can remain the same and the shoulders will still move forward relative to their starting point because the hips are moving forward from their starting point and the shoulders are attached to them (the bar is also moving backward slightly).

Another mistake is believing that in order to navigate the barbell past the knees, the knees must be pushed backward dramatically as the bar approaches them, creating the same tipping described above. While some minor change of back angle will be necessary for certain lifters based on proportions, if the starting position is correct, the knees will move out of the path of the bar adequately simply by virtue of their natural backward movement as the legs extend normally.

Bar Hitting or Swinging Around Knees

Even though I just said the knees will get out of the way, you can find ways to mess this up. The first way is a starting position in which the shoulders are behind the bar and/or the bar is too far back over the foot. The bar should start above the balls of the foot in the average lifter, slightly farther forward for longer-legged lifters, and possibly slightly farther back for shorter-legged lifters. The shoulder joint should be directly above the bar or very slightly forward of it in the starting position, making the arms vertical or slightly in front of vertical when viewed from the lifter’s side.

The second mistake is beginning to open the hips prematurely. If the angle of the back remains the same from the starting position to mid-thigh, the shoulders will only move forward. However, if the lifter tries to get the trunk more upright earlier than he/she should, the shoulders can move behind the bar early enough that the bar is then pulled back with them and hits the knees.

In either of these first two cases, this can also end up as the bar swinging out around the knees with light enough weights as the lifter makes these errors and then (usually unconsciously) swings the bar out to avoid hitting the knees.

Finally, the lifter may be pushing the bar back toward the body too aggressively too soon, dragging it against the legs. If the position during the first pull is correct, the arms are hanging vertically or close to it, and as a consequence, very little effort is required to keep the bar close to the legs—it will naturally hang there. Only after it passes the knees and the shoulders begin to move in front of it is any real effort necessary to prevent it from swinging away as it continues to try to hang directly below the shoulders.

The first pull will always be slower than the second due to the poorer mechanics of the joints in the smaller angles. How much slower depends largely on the lifter’s build—shorter legs suffer less of a blow mechanically at smaller joint angles than longer legs, so shorter-legged lifters are physically capable of moving through the first pull with more speed than their longer-legged counterparts (in the same way the former can stand from a squat faster than the latter). However, any lifter can intentionally slow the first pull down more than necessary.

DISCLAIMER: MID CITY GYM DOES NOT GUARANTEE RESULTS, WHICH CAN VARY FROM INDIVIDUAL TO INDIVIDUAL.